This day I would like to wander through a wood. Looking up at the map of the sky, fragmented by the leaves of the canopy, and then down at the dappled light on the autumn ground, I see my boots, one step at a time. And I love them all over again, for they are my favourites despite the chunk ripped out of one of them by an excited puppy with razor teeth and fast legs for running away. I can see him now with my boot clamped in his jaws, looking back to see if the puffing shouter was keeping up. She wasn’t.

In the wood I look for fairy homes, little round holes in the tree moss and I whisper a hallo. It’s always best not to irate the fairies I find, so a polite acknowledgement of their whereabouts is quite enough. I hear the sound of a wind combing the pines, singing with them, perfect harmony. Beyond the wood the tide rushes in, funnelled through nip-tuck lines of granite and basalt, ancient and immovable. Butter yellow lichen coats the faces of these rocks, as if the sun just landed there for a while, for me to see. Bubble, burble, swish and tumble, the mussels cling on tight. There are hundreds of them and, at low tide, I can slither across the slipper rocks to garner a feast. Wild thyme still blooms, scabious too and the flash of blood shows me where the rowans grow, their shout for attention, their hallo to the sky.

After my wander, I know where I’m going. There is a delightful tapas bar down a skinny side street, tucked in between a second hand shop and someone’s front door. The patron is big and very Spanish and his welcoming warmth greets me as I push through the door. Tables line the wall and tapas dishes, the counter. Bright smiles, a proffered glass of dry white with olives and crusty bread Señora? Si, gracias. I wait for friends to join me, for I am a bit early. As I sit my eyes roam the walls. There is a big painting of the bull run through Pamplona streets, the festival colours bright and full of sunshine. A portrait of the patron’s wife, now deceased, fills a side wall. She is very beautiful and there’s a sass in her eyes. Her hair is tumble free and dark around elegant shoulders. He has spoken of her with me, probably with everyone, for she was his one true love.

After a long and merry lunch, I wander through the streets, watching little gardens pass by. Voices lift in the air around me, ordinary people talking ordinary things. Where did we park? What’s for dinner? Where’s Wally? And yet not one of them is ordinary for we are, each one of us, unique, with our own life to live and our own frustrations, our own dreams. Who will live that dream? Only the brave.

I find my way home. Opening the door I smell the familiar smells and I breathe them in. This is where I live, where I am entirely myself. I may be alone now but I know who I am. Softly I relinquish the ties that bind, hanging them over a chair like a well loved cardigan. I put on some music, Sibelius. The swan of Tuanela was his favourite. Sinking into a chair I watch the day fade into dusk and I am filled with memories and gratitude as the beautiful and evocative melodies flow through the room, through me.

It is good, this day. And all is well. 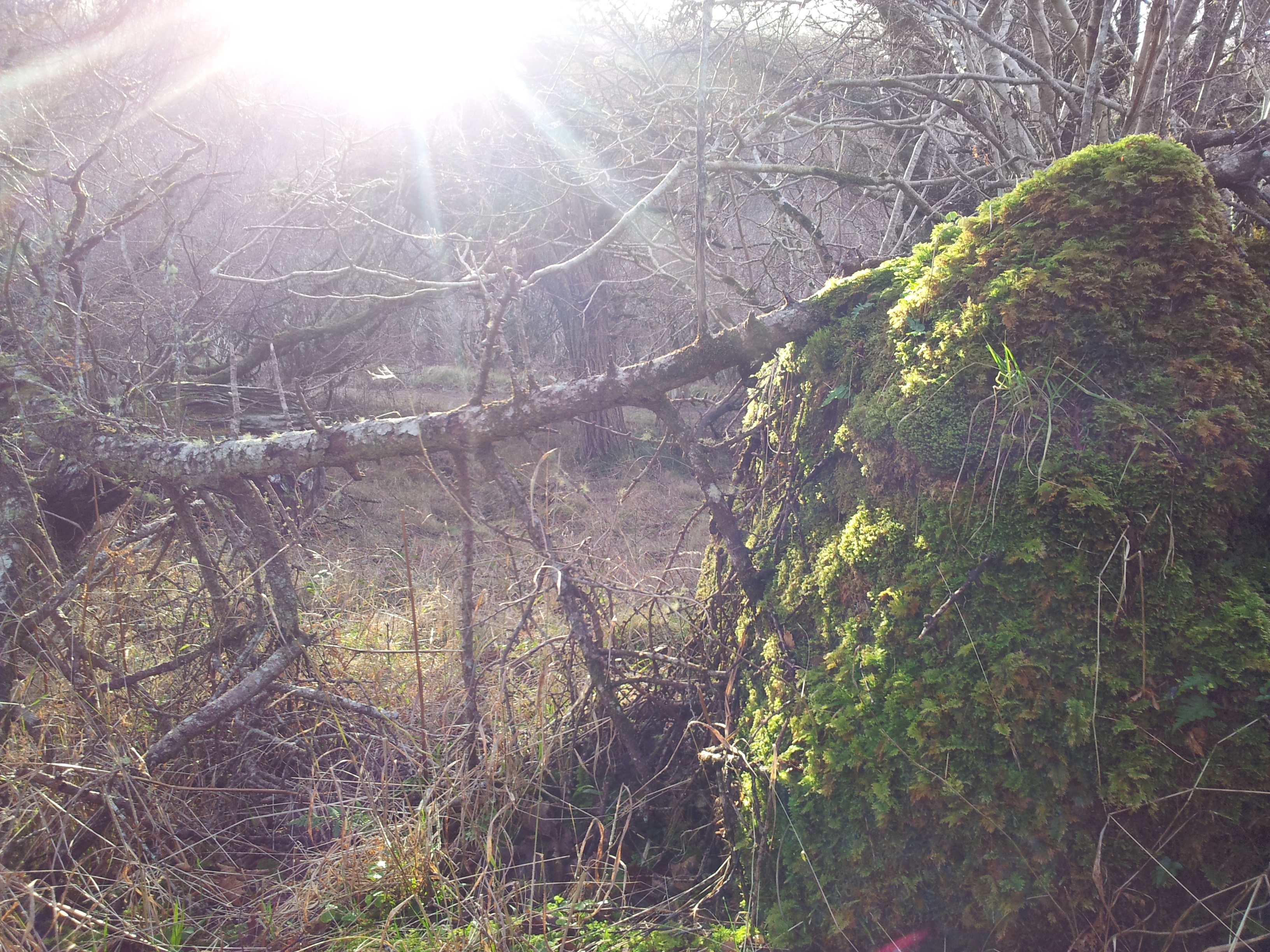 Our ‘attic’ or loft for the new generation of home-owners, is mostly dark.  There is one piddling light bulb just at the trap door and about a mile and a half of pitch darkness, densly strung with fat dirty cobwebs left by old spiders who thought flies might just fancy a blind spin among the boxes and crates of stuff nobody knows is there, nor cares.

We have employed a miner’s headlamp when required to ferret about for something we think might be there, something high on the critical list for Right Now.  Often, that initial enthusiasm is lost in the fight to avoid strangulation by Old Spider and the unlucky miner emerges furious and unrecognisable beneath Miss Haversham’s veil, coughing and spitting and in need of a number four cycle with maximum spin.  Old newspapers dissolve into powder at a single touch and underfoot lie fossils that foof into blue smoke after one bootly crunch. Then the fine dust of a rodent’s body rises into a gasping mouth to irritate the cilia into a frenzy, like a field of ripe corn in a hurricane.

Whatever it was that seemed so vital, has now lost all of its shine.  Getting out without breaking a bone is what rises to the top of the list.  The steps, just too low to reach the trap door, balance between two stairs in an alarming way, and the support group who said they would remain in position for just this moment, have popped down to put the kettle on.  Suddenly, all those old spiders, the clutch of their webbing, the dead mice and the darkness morph into a terrifying monster, one that is closing in.  All I need now is for the trap door to snap shut and I am doomed to become the next fossil waiting to puff out my own blue smoke in a hundred years time, beneath another booted foot.  My throat, or what is left of it, constricts, my heart begins a mad dash to nowhere and there is no way, without jumping, that I can re-connect with the wobbly steps.

That is the very LAST time I ever go up in that attic!  I cry, once I can speak again.  And, yet, there will be another time, because I am slim and agile and, as the space up there closes down over the years, the only one who will ever be able to get up there at all.

What I want to know, is why we put anything up there for in the first place?  The family silver, the pretty china, the old guitar, the boxes and boxes of books on Walks in the Gloucestershire Countryside, or old AA Roadmaps, or those hundreds of volumes of self-published novels by unknown writers, long dead and completely forgotten.  Their pages are brown and curling, their bound covers stained and damp.  And, yet, we keep on keeping them.  For what?  For whom?  Our children?  I very much doubt they would think beyond a bonfire.  Perhaps we are thinking that something magical might be lurking up there, something that would change all our fortunes, just by being brought into the light. Another never-ending story.

In order to see the light, we must have the darkness.  A darkness that envelops and holds secrets.  I can hear the mice up there some nights.  It sounds like quite a fun party at times and interrupts my sleep.  Tiny feet, many of them, skittering among family treasures, living out their lives in the darkness, along with the monstrous spiders and blind flies.  The mice make nests from old hardbacks, or plastic, or the gut from a guitar string.  Amazing what you can do with what is all around you.

When I am finally down on terra firma again, I look at the shaft of light on the landing floor, cast by the piddling light bulb and in a perfect, and very small, square shape, one I just wriggled through, twice.  I think about the darkness up there, and then of the darkness in my own attic, the attic of my head. Only I really know what’s up there, no matter how much telling I do.  There is always more. And it is not easy to squeeze through the trap door of my mind, nor it is it a pleasant experience.

Over here, are the regrets I admit to, and over there, the ones I don’t.  Further towards the water tank with it’s wonky lid, lie the memories of my children, what they said and did as little ones.  Down there where the webs are dense as a curtain, are the emotions and hurts I have learned to quiet.  Near them are stacked the doubts and the worries about which I can do nothing, and never could.  Closer to the piddling bulb are boxes of hopes.  I keep them near the light for easy access, although I have moved a few of them into a recess because they will never come about.  They are tidied away, but not quite bonfired, even though I really should clear that space.  The mice chew through old words and the strings that made my music, turning them into cosy nests for their young.  I don’t mind that.  It’s good to let go, to allow things to move on.  And, besides, I can make new words, new music.  But, first, I have to let go.

And letting go is the only way to live.  I will change the things I can, and let go of the things I cannot.  Knowing which is which might appear confusing, but, trust me, we always know the answer to that.

You usually have to wait for that which is worth waiting for.